nanoFlash is the world’s smallest, lightest, lowest-power, professional HD/SD recorder/player. The nanoFlash from Convergent Design represents a huge leap forward in tapeless workflows. Easily mounted to your camera, nanoFlash is designed to record higher quality images than the camera itself, by capturing never-compressed video/audio from the HD-SDI or HDMI output. nanoFlash utilizes the very high-quality Sony XDCAM 422 CODEC, recording the video/audio onto affordable and readily available Compact Flash Media, at up to 160Mbps (Long-GOP) or 220 Mbps (I-Frame). The footage can be stored in either Quicktime (MOV), MXF, or MPG file formats, providing near-universal NLE support as well as DVD / Blu-Ray authoring formats.

If you use nanoFlash with your camcorder, you can export QuickTime files or MXF files to a flash card. It is great for camcorders without too much space for storage. However, you may sometimes face the problem that Windows Movie Maker does not recognize the MXF files you get. How would you import the nanoFlash MXF to Movie Maker then?

Run the aPubsoft MXF Converter as the best nanoFlash MXF to WMV Converter, and click the “Add Video” button to load nanoFlash .mxf videos for conversion. 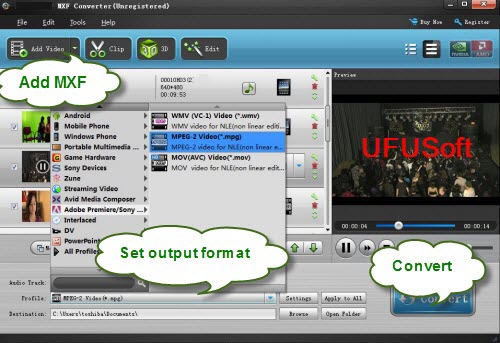 Click the “Convert” button below the preview window, and the nanoFlash MXF to WMV conversion for Movie Maker on Windows 10 starts immediately.

After the conversion is finished, just run Movie Maker and import the generated .wmv files for editing. You will find the output video work perfectly with Movie Maker on Windows 10/8.1/7/XP.

Tip: If you are using Final Cut Pro, iMovie/Final Cut Express or Avid Media Composer as your preferred Non-leaner editing tool, you can also use the aPubsoft MXF Converter for Mac to export FCP X, iMovie/FCE, or Avid compatible files.